Some days ago the world was aghast as it witnessed online the images of “Girl with Balloon” (framed by the artist, Banksy) self-destructing as the auctioneer’s gavel slammed down. The work of art, now reborn as a performance/conceptual work entitled “Love is in the Bin”, had been encased in a frame that the artist had fashioned years in advance for exactly this purpose, according to a video release shortly after the spectacle.

The videos and images make for amazing viewing, but to my eye they ask a few questions, as yet unanswered. My questions are: 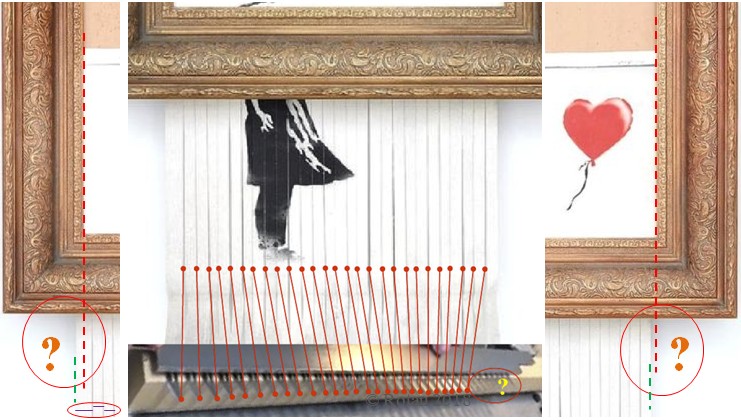 The misalignment of the hanging shreds might be explained if the shredded paper was closer to the wall than the paper remaining in the frame, and the photographer was taking the picture while standing to the left. However, this is unlikely. The photo appears to have been taken facing the picture head-on as there is no obvious trapezoidal distortion.

The extra thick leftmost shred might be explained by the corresponding (initial) blade being aligned that way with respect to the edge of the paper. But if that is the case, then all those extra unused blades, which appear to be equally spaced (based on the shreds and the video) would be extending too far to the other side of the frame. There are 27 cuts in the paper hanging below the frame, about four-fifths of the number of blades available for cutting.

The more I look, the more puzzling it becomes. But maybe this is what Banksy wanted.

(PS I know the video is showing the blades right-to-left as it’s from the back, but I’m not trying to match blades to cuts, just count them.)

That didn’t take long, did it? Banksy has uploaded a video that shows much more detail about the shredding mechanism, and demonstrates how it should have worked on the day.  It would now appear that the partially shredded work of art is in a state that the artist had not intended.

Clearly the performance was botched. But why did it fail? There’s a clue in Banksy’s latest video. In this partial from one of the video frames you can see that I’ve highlighted one of the strips wrapping around the roller. It’s quite possible that in the Love is in the Bin performance, one strip (presumably at the edge) wrapped around the roller until it became thick enough to stop the mechanism.